The Millers River watershed system contains many rivers, streams, lakes, ponds and wetlands. The region has 14 sub-basins, as delineated by the Department of Fisheries, Wildlife and Environmental Law Enforcement (DFWELE) Riverways Program.

North Branch Millers River. This sub-watershed is a headwater region for the Millers River. It is located primarily in New Hampshire and partially in the northwest corner of Winchendon. In Massachusetts the sub-watershed has a total of 1,380 acres (0.7 percent of the watershed in Massachusetts). It flows from East Rindge, N.H. through Lake Monomonac to its confluence with Millers River at Whitney Pond. Most of the area is forested, though the perimeter of Lake Monomonac is rimmed with residences.

Upper Millers River.  Principally located in the town of Ashburnham, this portion of Millers River flows from Sunset and Lower Naukeag Lakes. Two tributaries feed Sunset Lake, Bear Meadow Brook and Bluefield Brook. South of Sunset Lake, Millers River flows west, into Winchendon and Whitney Pond. The subwatershed has a total of 18,597 acres, representing 9.3 percent of the region. Most of the area is forested, though residential uses rim the various lakes.

Otter River.  The Otter River meanders north-westward from the Town of Gardner, forming the border between Gardner and Templeton. Eventually the river enters Templeton, flowing through a wetland from the Village of Otter River, to the Village of Baldwinville. The tributary flows through Otter River State Forest and is impounded at the Army Corps of Engineers Birch Hill Dam Flood Control Project. This sub-watershed has a total of 39,411 acres and represents 19.8 percent of the Millers River watershed in Massachusetts. This area has the largest population density in the Millers River watershed, along with the greatest percentage of commercial and industrial land use. The City of Gardner and the villages of Otter River and Baldwinville most likely contain the largest percentage of impervious cover.

Middle Millers River.  The main stem of the Millers River flows from Whitney Pond in Winchendon through its confluence with the Otter River to the Birch Hill Dam.

From there Millers River flows west through South Royalston in to Athol where it falls through hilly terrain before leveling out into a swampy area at its confluence with Tully River, west of the Athol Central Business District. The river enters the Town of Orange where it meets West Brook, and continues west to join Moss Brook and Whetstone Brook at the Erving town line. From the Tully River through Orange, Millers River is a popular canoeing location and home of the annual River Rat Race. The sub-watershed encompasses an area of 39,857 acres and represents 20 percent of the region. While there are large concentrations of residential, commercial and industrial land uses along the Millers River in both Athol and Orange, the majority of the region is forested and much of the forestland is protected open space.

Tarbell Brook.  The headwaters of Tarbell Brook are in the Lakes region of Rindge and Jaffrey, New Hampshire. The brook flows south from Pearly Lake to Damon Reservoir. West of the reservoir, Tarbell Brook meets another tributary flowing from Sip Pond. The brook flows south into Massachusetts in Winchendon at its confluence with Spud Brook in the village of Harrisville. Tarbell Brook then meets the Millers River in a swampy area south of Bullardville and west of Hydeville in Winchendon. The area south of the New Hampshire border encompasses 4,649 acres or 2.3 percent of the region. This area is predominantly forested. Most of the residential land is used for properties with greater than one half acre in size.

Scott and Priest Brooks.  Scott Brook flows south from Scott Pond in Fitzwilliam, New Hampshire entering Massachusetts in Royalston, where its name changes to Priest Brook. The brook flows along the border of Royalston and Winchendon, through the Birch Hill Wildlife Management Area to its confluence with Millers River near Lake Dennison. In Massachusetts, the sub-watershed has 6,282 acres and represents 3.1 percent of the region. This area is almost entirely forested, though there are some large lot residences.

Lawrence Brook.  Lawrence Brook flows south from a large wetland area in Fitzwilliam, New Hampshire entering Massachusetts in Royalston. The brook continues south, passing the historic town center to the east before entering a wetland area at the foot of Gale Hill. Here Lawrence Brook flows west to Tully Lake, passing through a steep section at Athol Road. This is the location of the popular Doan’s Falls. From the Massachusetts border, south, the sub-watershed encompasses 9,218 acres, or 4.6 percent of the region. This is another heavily forested area. 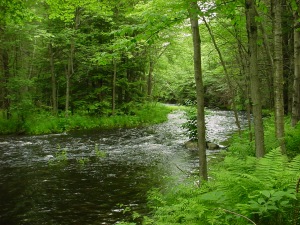 Tully River.  The headwaters of Tully River area at the sources of the East and West branches of Tully Brook. The East Branch begins in Richmond, New Hampshire, flowing south through extensive wetlands in Massachusetts, before entering Long Pond and Tully Lake. The West Branch begins in Warwick and Royalston, flowing south from the New Hampshire border through Tully Brook and Fish Brook, which join at Temple Hill, in Orange. The total acreage of the Tully River watershed is 21,373, representing 10.7 percent of the Millers River Watershed. The area is predominantly forested with complementary wetlands, bodies of water, agricultural land and some vacant open land. Only a small percentage of this area is residential.

Lake Rohunta.  Brooks and streams in northern Petersham, eastern New Salem, and southern Athol feed into a series of interconnected pools, flowing finally into the man-made Lake Rohunta, which eventually flows into Millers River in the town of Orange. This watershed is bound, on its southern edge, by te drainage divide for the Quabbin Reservoir. The total area of this subwatershed is 12,969 acres, representing 6.5 percent of the Millers Watershed. This area is largely forested with some recreational man-made lakes rimmed with residences.

West Brook.  This tributary of the Millers River flows south through Orange. It forms the boundary between the Athol and Orange before flowing into the Millers west of the Athol central business district. It has a land area of 3,723 acres, representing 2 percent of the watershed. The area is mainly forested with some large lots and residential land uses. This area is heavily forested, though there are some large lot residential areas.

Gales Brook.  This tributary of the Millers River flows south through the eastern side of Warwick, and into the western end of Orange, where it meets the Millers River. The subwatershed has a land area of 6,459 acres and represents 3.2 percent of the Millers watershed. Most of this region is heavily forested.

Moss Brook.  Moss Brook flows south through Warwick, west of Gales Brook and into Orange at its western edge. Its confluence with the Millers River is at the border of Orange, Erving and Wendell. The total land area is 7,755 acres or 3.9 percent of the Millers watershed. Most of this region is heavily forested.

Whetstone Brook.  This tributary flows north through Wendell on its eastern side. It shares a confluence with the Millers River with Moss Brook to the north. It has 3,134 acres and represents 1.6 percent of the Millers watershed. This region is almost entirely forested.

Lower Millers River. Millers River forms the boundary between Erving and Wendell, cutting through steep terrain on either side. Several small tributaries flow into the river along this reach. Its sub-watershed area encompasses 22,064 acres or 11 percent of the Millers watershed. This area is mostly forested and mountainous, though it is the home of the Erving Paper Mill.