The Millers River drains the western part of the ancient, formerly volcanic, Bronson Hill Upland, the remnant of giant folds of rock created when super-continents collided. The Bronson Hill Upland is the divide between the Laurentian continent and pieces of an early supercontinent known as Gondwana that were joined in the collision that formed the continent Pangaea. Later, the Pangean supercontinent split apart, forming North America and Europe.

Western end of watershed near confluence with Connecticut River

A succession of glaciers over several hundred thousand years eroded the mountainous landscape, stripping loose rock from the underlying bedrock as they advanced. At the end of the Wisconsin glacial period, the receding glacier released huge volumes of water, forming sizable glacial lakes. A network of rivers formed when the moraines, ice, and bedrock that impounded the glacial lakes eroded and drained into the Connecticut River.

Geology/Soils.  The river network eventually cut through sedimentary deposits to bedrock comprised of gneiss domes mantled by schist and quartzite granite to create the current valleys. According to the USDA, the underlying geology of the watershed is comprised of gneiss and schist bedrock covered with deposits of glacial till. These deposits dominate the geology. However, this glacial till is acidic due to the weathering of sulfidic schists. Thus, the till has little buffering agents against the effects of acid rain. Drumlins populate the area, the result of clay-rich sediments being compacted against rock outcroppings.

The surficial geology of the watershed shows vast regions in Winchendon, Ashburnham, Gardner, Templeton, Phillipston, Athol and Orange that contain sand and gravel deposits. These regions also coincide with some of the best quaity water supplies in the watershed. The Town of Athol sits on a great sand plain, the remnant of a glacial lake. These sand deposits are sought after for sand and gravel operations and generally contain groundwater aquifers.

Generally, the soils belong to soil associations that are steep  and extremely stony. These steep uplands are not well suited to farming, but support healthy forested expanses. The majority of the prime forestland soils occur on the hilly glacial till ridges upland from the rivers and lakes. The sand and gravel and alluvial deposits are confined to the narrow river valleys, providing excellent recharge areas to drinking water supplies. These sandy soils require moderate efforts to control erosion. 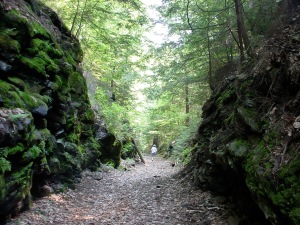 Topography.  The watershed has high topographical relief ranging from 200 – 1500 feet above mean sea level. The eastern portion of the watershed is an elevated plateau over one thousand feet high. As one travels west, the actions of glaciers and the Millers, otter and Tully Rivers on the plateau become apparent, leaving looming hills. The towns of Royalston, Athol, Warwick, Erving, and Wendell are rugged, hilly areas with deep, trough-like valleys. These hills are the southern end of the Monadnock range. The banks of the Millers River in Athol, Erving and Wendell are steep, exceeding 25 percent slope in many areas.

Water Resources.  The Millers River Watershed is rich in water resources. Numerous streams and rivers thread through the landscape, feeding the Millers River from the upland terrain. The region has scores of ponds and lakes, many of which serve as recreation areas, fishing sites, and public drinking water supplies (some of which are classified as outstanding resource waters). Many of the waters have abundant fish populations, and some of the waters are stocked with trout. Wetlands exist in abundance, providing needed habitat to the flora and fauna of the region. Adjacent to the rivers and streams are 133,540 acres of floodplain, that serve to absorb high waters during winter and spring snowmelt periods and during major storm events. These areas are rich in alluvium, a sought after agricultural soil type. Vernal pools abound in the region.

Wildlife.  The Millers River watershed has an abundance of forested areas that provide extensive and significant wildlife habitat. Rivers, wetlands, forests, meadows and mountain ridges provide sustenance, mating grounds, and vegetated cover, supporting stable populations of deer, otter, mink, muskrat, porcupine, fisher, and fox. There is evidence that populations of beaver, eastern coyote, black bear, and several species of migratory raptors and waterfowl have returned to the region. The watershed is also home to 26 species on the Massachusetts list of endangered, threatened and special concern species.